The vampire craze of recent years seems to have killed the possibility of anything original coming from this horror sub-genre. After the democratization of vampires by the teen-friendly "Twilight"saga or the 'Vampire Diaries", it seems as if everything goes, and absurdity reigns when it comes to find the new bloodsucking blockbuster. However, to blend the rules of the undead with 19th century American history does seem a bit of a stretch. A real historical icon as Abraham Lincoln sure has to have many layers to his life story, but somehow that  didn't seem good enough for the screenwriters of the film "Abraham Lincoln: Vampire Hunter". The concept is of course deranged; and for some maybe even outrageously offensive, but the issue is not with exploring such deviant form of pseudo history. The problem here is the approach. If the film would accept the irrational nature of its premise and be wacky, satirical, or downright a parody of history, maybe it would have worked. Director Timur Bekmanbetov pretends to treat this with great seriousness, making the side story of paranormal  revenge an extension of Lincoln's fight to abolish slavery and unite the North with the South. Its theme of freedom and righteousness is overshadowed by excessive slow-motion action sequences, a bland cast, and second class CGI that never feels well incorporated. It becomes hard to turn off our disbelief and enjoy the film. 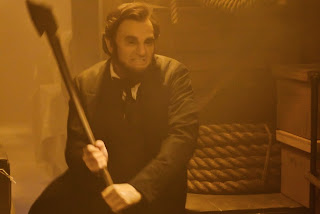 Employing a biographical approach to the life of the iconic president, played here by Benjamin Walker. We start from his childhood in which we find out why he hates vampires so much, besides the fact that apparently vampires are pro-slavery, one of them is responsible for the terrifying death of momma Lincoln. From here on the fiction and facts are so tangled and abstractly blended, a historian might have a heart attack by the time we are told that the twist here is that vampires cant kill each other. I'm sure Bella and Edward feel much safer now, but unfortunately this rules seem to only apply to 1800's Confederate America. Abraham meets his professor in the art of hunting the undead, and becomes an avid assassin waiting for his chance to take revenge. This is when the fire for justice is ignited, and with a very busy schedule, he is able to work as a shopkeeper, pursue the love of a woman, study to be a lawyer, and of course, chase Dracula's descendants. Once the Civil War becomes a reality, as expected the vampires will side with the slavery-friendly Confederate States, to fight the abolitionists. Silver in great quantities will be needed to win the ordeal. The resolution is a mix of what really happened, and evidently, a big dent to the lines of the vampire army. At least Lincoln remains a man of principle, even when he fights demons with an axe on top of a burning train. Surrealism just got a new name. 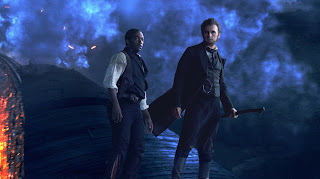 To its favor the film has some, and I must emphasize SOME, amusing action sequences. All of them conceived with an obsessive predilection for super slow motion, in which you can see every drop of blood falling... a million times. This visual gadget becomes very repetitive and cliched after a while, so the effect loses its charm. A couple of memorable lines form part of the script, not always from Lincoln but from his vampire ally who recited cool lines such as "A boy only gets this drunk when he wants to kiss a girl or kill man"Something cool to recite at a drunken party, because it easily erases any other possibility for a night that ends up in vomit and regrets. In lines like this and the cartoonish look of the bloodsucking creatures is where the film could have found some strength, and not in its unreal seriousness about itself. The acting is barely noteworthy, and the plot is just a usual quest sprinkled with history book leftovers and gore. The scariest part is the possibility of American youth perceiving  this with any historical accuracy. Although one must admit that if this gets kid talking about Lincoln as a cool superhero, then I guess it deserves some forgiveness. 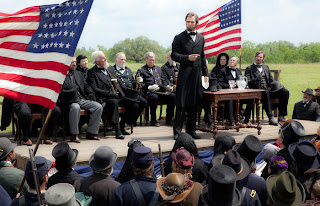 For what its worth, the film is just deserving popcorn material. Steven Spielberg's Lincoln biopic will be a success just by the mere fact that it doesn't include vampires, and that sets the bar very low for the iconic director. So let us hope that his vision will erase this of a slasher Lincoln who fancies axe-murdering  monsters. If you must see it, try to be in a very, very, blank state of mind to find some enjoyment. Now out on Blu-ray/DVD. Grade C-